Slovenia, officially the Republic of Slovenia is a country in Central and Southeastern Europe touching the Alps and bordering the Mediterranean.

Slovenia borders Italy to the west, Croatia to the south and east, Hungary to the northeast, and Austria to the north, and also has a small portion of coastline along the Adriatic Sea.

The capital and largest city is Ljubljana.

Historically, the current territory of Slovenia was part of many different state formations, including the Roman Empire and the Holy Roman Empire, followed by 500 years of the Habsburg Monarchy.

In 1918, the Slovenes exercised self-determination for the first time by co-founding the internationally unrecognized State of Slovenes, Croats, and Serbs; later to become Kingdom of Yugoslavia.

During World War II, Slovenia was occupied and annexed by Germany, Italy, Hungary and Croatia only to emerge afterwards reunified with its western part as a founding member of the Socialist Federal Republic of Yugoslavia.

In 1991, Slovenia declared full sovereignty. Today, Slovenia is a member of the European Union, the Eurozone, the Schengen area, NATO and OECD.

One of the first things you’ll notice arriving to Slovenia is the extraordinary variety and diversity of landscapes.

In this small piece of Europe, nature has combined and interwoven a whole range of diverse landscapes. Mighty Alpine peaks with sheer faces, deep karst caves and potholes, softly rounded hills and vast plains: Slovenia has it all. There are also beautiful lakes and bubbling brooks, the silence of mighty forests and the crashing waves of the sea.

In geographical terms, this means that Slovenia lies at the junction of the Alpine, Mediterranean, Pannonian and Dinaric worlds, all of which have left their mark on its landscape.

Forests of Slovenia – 100 Shades of Green

In Slovenia the predominant colour is green. Forests cover almost 60% of the territory, placing Slovenia as third most forested country in Europe. There are even remnants of virgin forest in the southern part of the country.

Mountains and highlands of Alps

Most of Slovenia is mountainous or hilly, particularly its north-western part along the border with Austria and Italy. From west towards east the Julian Alps, the Karavanke range and the Kamnik-Savinja Alps  are stretching. Slovenia’s highest peak, Triglav  (2.864m), could be found in the Julian Alps. All the mountain groups include peaks over 2,000 metres high. Further to the east lies the mighty Pohorje, a highland area reaching heights of around 1,500 metres.

A significant part of Slovenia’s surface is taken up by plains, basins, valleys and karst fields.. Most of the flat areas are in the north-eastern part of the country, where the Pannonian plain begins. There are also many hills in south-eastern and eastern Slovenia, in the winegrowing areas. The sunny slopes of many hills in the winegrowing districts are planted with vines. Rolling hills also occupy large areas to the west and south of Ljubljana.

Slovenia’s coast is short but full of variety. There you will find the internationally famous Sečovlje salt panes  and beautifully preserved medieval towns such as Piran. The hinterland is dominated by the hills of Slovenian Istria.

And the Karst Underworld

Slovenia is remarkable even below the surface. In its karst areas there are thousands of karst caves.

Slovene is only spoken by just over 2.3 million people

The small number of people speaking Slovene makes it almost a secret language. It is a native language to approximately 2.1 million people and is spoken by Slovenian minorities in the bordering counters of Italy, Croatia, Hungary, and Austria. As a result of a migration at the beginning of the twentieth century Slovene can also be heard in Ohio, USA. After WWII, many Slovenians left their home country and moved to Argentina, so the Slovenian language is also present in South America. Other countries with Slovenian speaking minorities are Serbia, Canada, Australia and South Africa.

Slovene is one of the oldest written Slavic languages

The first known written documents in the Slovenian language are The Freising Manuscripts. The original date of these three religious texts cannot be precisely determined, but it is believed that they were written in the 9th century. The date of origin makes The Freising Manuscripts also the oldest texts written in any of the Slavic languages. The texts were discovered in Freising, Germany. Since 1803 they have been kept in the Bavarian State Library in Munich, and were only displayed in Slovenia once in 2004.

Slovene is one of the rare Indo-European languages which still uses dual – a grammatical number that some languages use in addition to singular and plural. It is also the only official Language of European Union that uses dual. Dual is used when referring to precisely two persons, object or concepts, identified by the noun or pronoun. Slovenian plural starts with three or more, as in most of the countries worldwide starts with two or more.

The dual is a very unstable grammatical category but been perfectly preserved in the Slovenian language. Though rare in world languages grammar, the dual forms is also used in the Breton language, the Arabic and the Hebrew.

There are 46 different dialects in Slovenia

On account of only 2.3 million people speaking the language, the 46 dialects of Slovenian language, often classifies Slovene as the most diverse Slavic Language. Slovenian dialects are categorized into seven regional groups: Carinthian, Upper Carniolan, Lower Carniolan, Littoral, Rovte, Styrian, and Pannonian. Sometimes dialects can be so different from one other, that it is hard for people from different parts of Slovenia to understand each other. The diversity of the Slovenian language is well captured in a Slovene proverb “Vsaka vas ima svoj glas “, meaning “every village has its own voice.”

Slovenian language is the glue of the nation

Only declaring its independence in 1991, Slovenia is a relatively young country. However, the dream of a sovereign country among Slovenes is as old as the nation itself. Different countries and kingdoms throughout history occupied the territory of what is now known as the Republic of Slovenia. Many of those occupations wished to destroy the Slovenian language and eliminate the Slovenian nation. Still, it was actually the Slovenian language that kept the nation together throughout the centuries. It was after hundreds of years of resistance and unwillingness to submit that the nation’s dream came true and Slovenia finally became an independent country.

The Slovenian language does not possess any vulgar, curse words. Usually when Slovenians use traditional curse words it sounds sillier than it does offensive. Perhaps the most popular curses in the Slovene language are “Tristo kosmatih medvedov” (Three hundred hairy bears),” Naj te koklja brcne! “(A hen should kick you!), and” Krščen matiček!” (Baptised Matthew!). When Slovenes wish to truly curse, they usually borrow one of the curse words from former Yugoslavian countries.

Slovene was forbidden in schools

During WWII Slovenia was occupied by Germans, Italians, Hungarians, and Croatians. With the occupation came the ban on using the Slovenian language in schools. Some occupiers also forbade the use of Slovene in all public places. If caught speaking their native language in school, students were beaten with a wooden stick, ruler, or were forced to kneel on a pile of corn. Thousands of Slovenian books were also destroyed at the time causing irreparable damage to Slovenian heritage.

Whenever you are in a foreign country the native speakers are absolutely thrilled if you thank them in their language. To know some other expressions might also be helpful.

How to introduce yourself

We have a saying in Slovenia that “love goes through the stomach” and the traditional Slovenian food confirms just that. Though Slovenia is a small country it has a lot of traditional dishes, that differ greatly from one another – depending on the region they are from. Let us introduce you to some of the best known among the locals and the visitors.

This is a sausage, one of the most famous Slovenian dishes and since 2015 its name is protected. According to the rules for making the “Kranjska Klobasa” it contains at least 68% of pork, 12% beef and not more that 20% bacon and it must be smoked. It originated in the Gorenjska Region from where it spread throughout the whole of the country.

The storytellers of old Ljubljana consider it as an important part of the menu at ceremonial and important events.

The most typical Slovenian desert made of different types of dough and various fillings – more than 80 different kinds, from which tarragon (»pehtranova«), walnut, cracknels (»ocvirki«) and poppy seeds fillings are the most famous.

In Slovenian households there is no Christmas or Easter without The Potica.

A juicy dessert, stuffed with poppy seeds, cottage cheese, walnuts and apples originally from the Preknurje Region in the north-eastern part of Slovenia. Like the Potica it is protected by the “Recognised trademark of traditional reputation”.

The funny literal translation of this Slovenian food is “Over-Mura Moving Cake” – The Mura being the main river of the region. 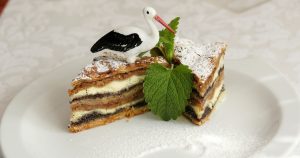 A top product of the centuries-old tradition of salting and drying the meat of the pork thigh on the Karst bora. The “bora” is a wind at home in the Karst Region of Slovenia. It goes extremely well with the wine of the region like The Teran or the Karst Red.

A traditional Slovenian food made from a dough and filled with variety of fillings. Thay are prepared from different types of dough, they can be baked or cooked, savoury or sweet. They are served as an individual dish or a side dish.

They are a “must try” before leaving Slovenia!

“Jóta” is a Karst and Friuli (Italy) national single dish or stew. Today, she is virtually no longer known in the Friuli, while she quite at home all over The Primorska Region. Jota is the dish of our grandmothers – as there were fewer foods in the winter they had to be quite clever with the use of the ingredients. Jota is mainly made of turnip, cabbage, potatoes and beans with some dried pork ribs or even s kranjska klobasa.

If cold, the “Jota” will definitely warm you up and it is therefore available in any Slovenian mountain cottage.