When you book with an account, you will be able to track your payment status, track the confirmation and you can also rate the tour after you finished the tour.
Sign Up
1380

The Skocjan Caves should be a Slovenian must. Moving through this majestic cave system you will find yourself walking into the land of the Lord of the Rings! Caves with amazing natural phenomena  are a marvel straight out of Middle Earth.

After leaving this mysterious world relax in the company of the majestic white Lipizzaner horses. Tour the farm in Lipica, name of village that gave Lipizzaners their name.

The Skocjan Caves are the most important underground phenomenon in the Karst and in 1986 were entered on UNESCO’s list of natural and cultural world heritage sites. The underground canyon of the river Reka that runs through the caves is so far the largest known in the World.

The Skocjan Caves consist of eleven caves. The exceptional character of the caves is mainly in its dimensions to which visitors are not left indifferent. The enormous underground spaces achieve their maximum dimension in Martel’s Hall, which reached 146 m in height and has a width of 120 m!. A colorful mix of enormous stalactites, collapsed ravines, river canyons, natural bridges and limestone pools are examples of outstanding natural beauty. To stand on the natural bridge with breathtaking sites and views and look at the big river disappearing underground on the bottom of the Great Valley, 160 meters below the surface, is both majestic and frightening.

After leaving Tolkien’s Mines of Moria you will definitely enjoy the peace and quiet of the natural environment of the Stud Farm of Lipica whose development is based on breeding thoroughbred horses – the Lipizzaners, white horses that have been bred at Lipica farm for more than 400 years. The adult Lipizzaner is characteristically white, but the foals are brown, reddish or grey; they turn white only after six to ten years.

Take a guided tour of the stud farm  and its estate and visit these magnificent horses in their stables. But the most impressive image for the most of the visitors will be the image of mares with foals at pastures.

Drop off will be at same location as pick up 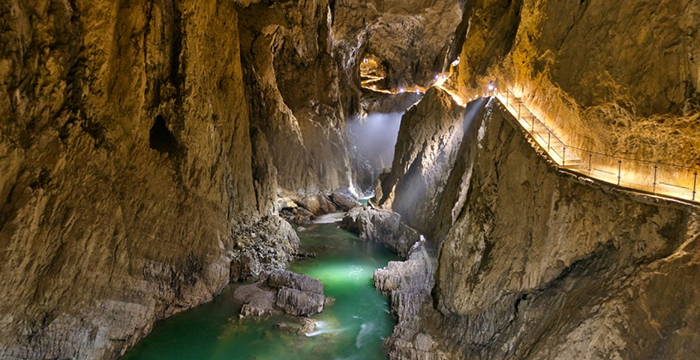 UNESCO’s Town of Idrija, Castle and Mercury Mine Tour, Half Day Trip from Ljubljana